Steampunk Tower 2  is a strategic tower defense game that takes place in the alternative steampunk universe.

Under your control is the secret base, hidden in the mountains, the big flying Carrier with the Battle Tower on its board, and a team of specialists who perform special missions.  You need to build your base, research and upgrade new technologies and manage the Battle Tower in endless fierce battles with the Cult’s army.

The Story So Far

In the days of Victorian England, in the era of industrialization, railroads and steam machines, a new mineral field was found in England. The mineral was named Etherium.  When electrical current was being passed through it, it generated a lot of heat without destruction.  It perfectly fitted as a heating element in steam machines. Gasoline internal combustion engines were not widely used.

In the time of First World War, a prominent British industrialist Lord Bertram Bingham defended  the Etherium mine, using unique battle towers in the defense. After the war he created the Etherium Distribution Council and the World entered in the new era of innovations and technological growth.

However, the development of geological exploration technologies allowed to discover new Etherium fields all over the World. The race for Etherium has begun. The Council lost its monopoly and influence on Europe. 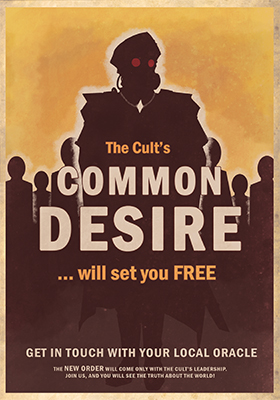 The group of radical scientists, led by Nathaniel Hailey, advocated for Etherium enrichment experiments, in order to get new more powerful mineral and return the Council authority! Lord Bingham banned research in this area, but Nathaniel performed his experiments in secret.  In the last of his experiments, he finally succeeded in getting a new mineral – the “Black Etherium”. However, the experiment ended by the unknown energy explosion and Nathaniel died.

The technology of the “Black Etherium” creation is still covered by mystery. Its properties are poorly understood. It is only known that when being close to the mineral the man experiences unexplained feeling of solidarity and is willing to create and spread the “Black Etherium” all over the World.  That phenomenon has been called “Common desire” and was used as a base to create a new powerful organization – the “Dark Cult”.

The “Cult” quickly took control over Germany and the nearest territories.  Lord Bingham was persecuted and  had to fake his own death. He hid in one of his secret bases, where he worked on his new powerful weapon, in anticipation of war.

The War was inevitable. Using “Black Etherium” influence, the “Cult” was able to create fearless soldiers and hypnotize the politicians.   The countries of Europe united in the fight against the “Cult”, and the Second World War began.

Allies understood that they could not defeat the fanatics in the fair battle, and made a decision to go into the deepest defense. All resources were sent to create and maintain effective defense line. The war turned into sluggish, trench warfare.

Around this time, Lord Bingham returned on the scene with his new weapon. He successfully performed the tests of the Big Flying Carrier with the Battle Tower on its board. He intends to help Allies in search of methods of struggle with the “Cult”. However, he is too old and he needs a skillful commander. The Commander who will change the course of war!

PRESS KIT
Find us on: